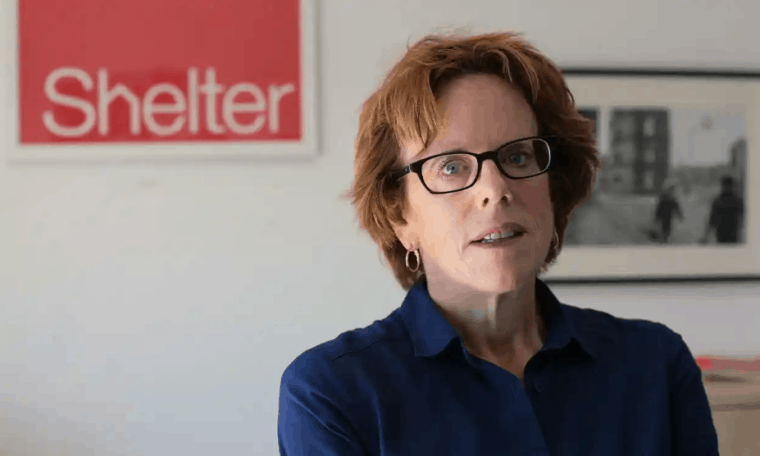 When thousands of women are forced to conclude that their safest option is a life of abuse, something is deeply, frighteningly wrong.

So often, by the time women find themselves homeless and come to Shelter for support, they’ve been deprived of any power over their own lives for so long, both by the men they love and by the system that should have helped them, that their trauma is way beyond what you would expect a housing adviser to help with.

I am so proud of the way our people are responding to what is a crisis of escalating need, exacerbated by the shift from poverty into destitution of many who depend on benefits, and by the melting away of other support services as both central government and local authority funding disappear.

And at the bottom of it all, the stark truth remains: there is nowhere for these women to live. Whether they are fleeing abuse, or evicted from a private tenancy, or clawing their way back from the streets, there are no homes they can afford. There are 1.1 million people waiting for social housing – plus many more who haven’t been allowed onto the list. Yet we built just 6,000 new social homes last year. The notion that the government’s “affordable housing” is solving the housing crisis is a joke.

While a lot of my time is spent in London, every day I see the national emergency our housing crisis has become, and talk to our clients regularly. A few weeks ago I met a woman whose case I wish was not typical. She had fled her home in London with her three children because of domestic abuse, to another major city in England where she had a friend. She and her children slept on her friend’s sofa and floor for a few weeks and she got her eldest into a school. When that became unsustainable they slept in her car for a week. Then she presented as homeless to the council. She was deemed intentionally homeless and told to return to London. At that point she came to Shelter.

We helped her to get emergency accommodation from the council because her children are “in need”. This was intensely traumatic as she had long been threatened by her ex that if she ever came to the attention of children’s services or the police, the children would be taken away. The emergency accommodation is one room in a B&B with two beds for the four of them to share. The travel to and from her eldest’s school is £40 per week. She has left a home and job behind and has no hope of either where she is. We are providing some emergency financial help, emotional support, and we are fighting her case to be accepted as homeless by the council.

Even if she is accepted as homeless, the result will be temporary accommodation – probably only slightly better than the B&B.

Her choices are bleak. In my experience, she may be threatened with having her children taken away. She may well return to her abuser.

Many stories of the women in our research in Manchester began like this. We interviewed women who had experienced both domestic abuse and homelessness and perhaps the clearest message was that at no point had any of them been offered an option that was in every way better than where they were at that point. Every choice was perilous in some way, either to them or to their children. Thousands of women across the country are lost in this paralysis and despair.

And when thousands of women are forced to conclude that their safest option is a life of abuse, something is deeply, frighteningly wrong.

Our frontline workers at Shelter strive to find a way out for women, fighting by their side for the safe home that should be a right.

We are also privileged to have the resources to campaign for change. And the inescapable fact is that while a cramped, lonely, sometimes scary B&B may be better than abuse, the only real way out for countless women is a home of their own. That means social housing. I’m sick of being told getting social housing built is complex, or costly, or a long term solution – it’s a choice, and one politicians will make if the pressure grows enough, that’s why we invite individuals and organisations to join our campaign.

A safe home means a family has a future. Our politicians have a choice. These women have none.

About Shelter
Shelter helps millions of people every year struggling with bad housing or homelessness through our advice, support and legal services. We campaign to make sure that, one day, no one will have to turn to us for help. For free and independent advice from Shelter please visit the Shelter website.

Across the UK Pause Practices are finding new ways to continue to support the women they work alongside through the COVID-19 pandemic. This one is a particularly tasty innovation... Yum!👇☕️💚 #doingthingsdifferently twitter.com/Derbyshi…

Some great and really helpful resources here - thanks Karen! 🙏 twitter.com/dr_treis…

Pause North East Lincolnshire ran from 2017-2020. 80% of women they supported had experience of domestic abuse. They supported women to talk more about their experiences and with @ElectricEggUK co-created the More Than What’s Written. Watch it now 👉bit.ly/3dAxKyP 👈

Thank you to all the women who engaged with Pause North East Lincolnshire, for your hard work and many achievements – we know the work will have been hard at times, but you stuck with Pause and look what you've achieved! @AmyandAwesome @sarahappleby73 @ChealEle @JoKelly27488727 pic.twitter.com/pIrT…

Last week we sadly had to say goodbye to Pause North East Lincolnshire. Over 3 years the practice supported 32 women, who had 108 children removed from their care & achieved so many positive outcomes working alongside the women. Thank you! @NELCouncil @JoKelly27488727 @ChealeEle pic.twitter.com/MuPF…