I am a child

A woman’s experience of domestic abuse during her childhood.

I am a child from a Domestic Abuse relationship living in the body of a grown woman.

I didn’t realise that until recently; the far reaching impact of a childhood of feeling unsafe and unsure; the good girl, the one who tried to hold everything together, emotionally regulate the adults around me, walking on eggshells and trying to keep everything safe. The worry when voices started to raise or dad would go to the pub – what would happen when he came home? The relief and almost sense of safety of just my mum being there, the golden moments when it was just us and my sister and no worry and fear from the angry man who could tip the world upside down in a heartbeat.

And then the happy times when he hadn’t been drinking which caused me so much conflict because I could then see the goodness in him and feel love for him – how could he hurt us when he loved us and was so much fun? But he did, regularly, and this did not stop until mum left when I was 18.

So she left and she didn’t come back and it was all over. I thought it was all over but it wasn’t, how could it be he was still my dad, the same angry man who couldn’t control himself when his anger rose. I remember the sense of ‘this was a thing that needed to be hidden, not talked about, acknowledged, shared’. No one in school knew or at least I don’t think they did. Everyone saw his outward persona, the smiling, fun guy who got on with everybody. I’m sure the adults closest to us knew; I know my mum’s friends did and I saw their reactions, the wary glances, when they could see a shift in his body language and his eyes darken.

I remember black eyes, holes in doors and walls the next morning, shouting, sitting at the top of the stairs making promises to my sister that it would be ok, we would stay together no matter what. I remember searching my mum’s face for injuries and indications of how I should behave the next morning and also a fury and anger at him which I never once shared replacing it with a numbing that 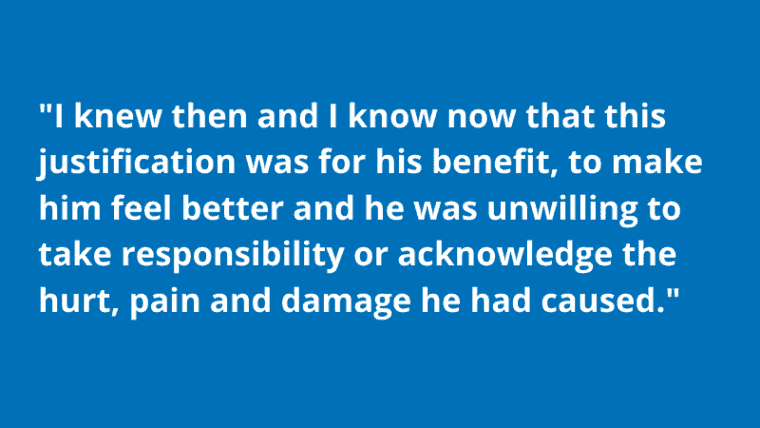 I now know has impacted on so many areas of my life. And I remember him once when I was small trying to explain to me why it had happened and why he couldn’t control the anger, I knew then and I know now that this justification was for his benefit, to make him feel better and he was unwilling to take responsibility or acknowledge the hurt, pain and damage he had caused.

The pain this childhood caused continues; it feels like a break in the foundation of my being caused fractures across my sense of self which reach into all areas of my life.

I thought it would stop as I became older but it didn’t. I have spent the last 28 years of my life in a kind of trance-like relationship with him, trying to stage manage every encounter. And of course the abuse has continued, in different ways, in his new relationship. I hear emotional abuse and see angry outbursts which of course he can justify because he doesn’t hit her – he doesn’t think it is wrong and I struggle with the familiar pattern that occurs inside me, I feel like a child but I am an adult and I don’t quite know how to reconcile the two. This has continued to pull the rug from underneath me, traumatise me, give me flashbacks and make me feel resentment, but I have still tried to maintain the relationship, unsure what anything else would look like and feel like.

He always expects me to follow the usual pattern and ‘step back into line’, keeping quiet about what had happened and returning to attempts at managing our interactions to reduce the likelihood of ‘making him angry’. There was no acknowledgement or understanding from him of the pain it had caused me and my children, no idea of my attempts at comforting them when they were distressed that Grandad had been angry and ‘would there be a divorce?’ mirroring the comforting of my sister so many years ago.

I decided I couldn’t go on in this way, I could not abandon myself, live in this turmoil, I needed to speak; suddenly the desire to share what I felt was urgent and overwhelming. And, I almost thought he might hear me, he might listen, he might reflect; after all I am his daughter and he loves me. So I tried to talk to him, and he told me firmly that I am wrong and I am only seeing one side. I don’t see what happens behind closed doors, when I’m not around. How the women in his life, my mum and step mum, push and push until he explodes and then people think he is ‘the bad one’. I tried to stop him, to tell him about my experience as a child sitting at the top of the stairs, it wasn’t even about the adults at this point I wanted him to hear my experience, the child trying to make her dad hear and see the impact on her just this once. It was about wanting this cycle to stop, for me and for my children. I told him, “I was the one who heard the screaming who worried and cried” and his response was cruel. He told me “I never heard your mum scream”. And there it was, cold, arrogant, ignorant of the pain he has caused and unwilling to listen. I shouted back “it was you, you were the one screaming” and then I realised…it was him, because mum did what many mums do, she stayed quiet, even in the face of his terrifying rage, she stayed quiet to protect her children. 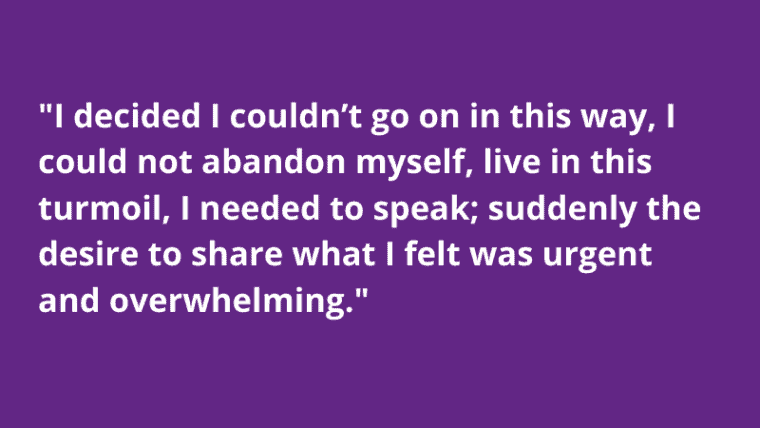 And suddenly I felt calm, I felt loved and I knew what she did for all of those years. And I knew what I needed to do. I calmly told him that whilst he is drinking neither me nor my children will visit his house and he should not visit mine. These are the new boundaries of our relationship, which he won’t accept and shouts at me “we’re done”. And I was not surprised at this inability to take responsibility, to hear me but I am sad that he is willing to do this. I felt for the first time in my life a full calm, in my body, in my mind. The cognitive dissonance was gone and I felt I was breathing fully for the first time in I cannot remember how long. I looked at myself and I saw for a moment the child and then the woman I just became.

I was a child living in a Domestic Abuse household.

I am not hiding anymore.

I need to own all of this complexity and I promise I will work hard to never abandon myself again.

If you would like to find out more or have any questions please email communications@pause.org.uk

If you need support or are affected by any issues raised you can get support below:
Women’s Aid
Surviving Economic Abuse
Scottish Women’s Aid
Women’s Aid Northern Ireland
Welsh Women’s Aid
Rights of Women
Imkaan

Some Pause-itivity from Roz, our Knowledge & Evaluation Lead "I am proud to be the daughter of immigrants. Among other things, this #BlackHistoryMonth I will be perfecting my Mauritian Dholl Puri making. Since moving out of London, I can't buy it locally!" bit.ly/3psYFoW pic.twitter.com/wYx4…

About 2 days ago · reply · retweet · favourite

Thank you @JohnCryerMP of Leyton and Wanstead for supporting our #TimeToDeliver campaign for a better letterbox contact system✉️📬Great to hear that MPs are responding to the call and raising the issue with their local authorities. It's #TimeToDeliver a system that works! pic.twitter.com/YzSU…

Huge congratulations to @PausePlymouth for securing a further round of funding💚 twitter.com/Larrah/s…

Our Pause postbox is doing the rounds!📬Today it is in St Helens. Thank you to the Pause St Helens team for making some noise around letterbox contact and letting everyone @HopeStHelens know it's #TimeToDeliver✉️ Support the campaign ➡️action.pause.org.uk/… twitter.com/KellyKel…